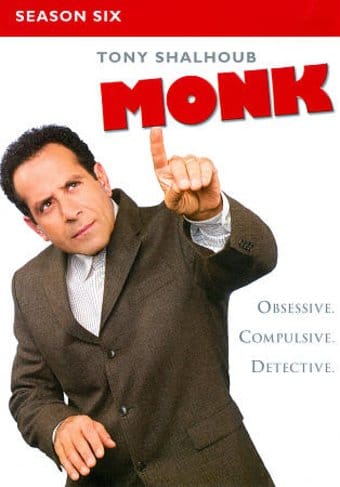 The critically acclaimed, Emmy- and Golden Globe-winning MONK finally gave talented character actor Tony Shalhoub a chance to shine. Shalhoub's performance as the mentally unstable title character contains just the right mix of pathos and perfect comic timing. Adrian Monk (Shalhoub) is San Francisco's most brilliant detective, but is unable to serve on the police force because of his crippling neuroses and obsessive-compulsive disorder. However, he continues his investigations independently, often solving cases before the actual police are able to do so, and always seeking out clues to the unsolved murder of his wife. The combination of comedy, mystery, and a distinctively eccentric character have led many to dub MONK the successor to COLUMBO. This collection presents the series' sixth season, which includes guest appearances by Alfred Molina, Sarah Silverman, and Snoop Dogg, who performs the show's theme song in the episode "Mr. Monk and the Rapper."