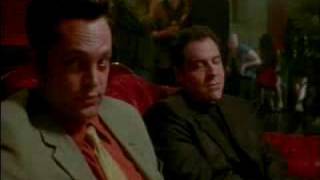 Following their success five years before with SWINGERS, Jon Favreau and Vince Vaughn team up again in MADE, a comedy about two very different down-on-their-luck L.A. friends who get caught up in a dangerous deal in New York City. Favreau stars as Bobby, a hardworking, very serious construction worker who dreams of becoming a boxer and settling down with his stripper girlfriend (Famke Janssen) and her young daughter. Vaughn plays Ricky, an obnoxious ne'er-do-well who thinks that pulling off a big job for boss Max (Peter Falk) will be their ticket to the big time. The duo is sent off to New York to take part in a deal they know nothing about; while Bobby waits calmly for them to be discreetly contacted, Ricky never shuts his mouth, barking orders at random people, flashing his green and his wry smile all over town, annoying the heck out of everyone he meets, especially Ruiz (Sean "P-Diddy" Combs), who is their connection. The film is beautifully shot by master cinematographer Christopher Doyle, who recently filmed Wong Kar-Wai's stunning IN THE MOOD FOR LOVE. Bobby and Ricky make the perfect pair; Favreau is often silent in scenes, watching deadpan as Vaughn steals the show as the brazen, overbearing, but lovable Ricky. To lend authenticity to the film, Favreau shot it in such landmarks as Hollywood High, Tavern on the Green, and the Central Park Zoo, and he hired SOPRANOS stars Vincent Pastore (Big Pussy), Federico Castelluccio (Furio), and Drea de Matteo (Adriana) to further the mob connection. The film was coproduced by Peter Billingsley, who played Ralphie in 1983's beloved A CHRISTMAS STORY.

25%off
The Rarest Comedies of Edgar Kennedy, Volume 1
$5.95 Spring Sale
Add to Cart