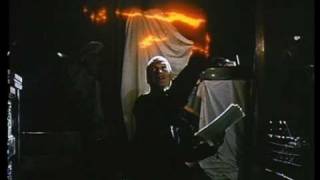 Boston, 1691. A frightened village condemns to the gallows a handsome man for bartering with the Devil. But Satan does not forsake his disciple. The man is transported 300 years into the future to fulfill Satan's sinister plans. Only a witch hunter who follows him into the future and a contemporary Los Angeles woman stand in his way.

The night before a warlock is to be hanged and burned in 17th century Puritan Boston, he is thrown through time, 300 years into the future, to Los Angeles, California. His task: to destroy creation by putting together three sections of the Devil's Book (Grand Grimoire), which will ultimately reveal God's true name. However, the warlock's accuser from 1691 has followed him through time and will stop at nothing to destroy him once and for all.