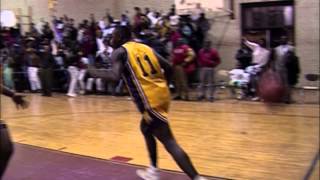 One of the most critically acclaimed documentaries of all-time, HOOP DREAMS has become a model for how to construct a fact-based film, creating intimate and emotionally resonant portraits of its subjects while exploring the larger social issues that those subjects are negotiating with. The film focuses on William Gates and Arthur Agee, two teenagers from inner-city Chicago, and follows them for almost five years, the period where both enter and complete their high school careers. Both young men are talented basketball players, and as the title suggests, have their eyes on the college game and eventually the NBA as their best shot at escaping the poverty they grew up in. But as William and Arthur reach for their goal, they must contend with the pressing issues and difficulties of social class and racism, as well as the predatory practices of the basketball recruiters who entice the pair to attend their schools. In this way, HOOP DREAMS chronicles much more than just the individual experiences of two young men. It examines the larger problems that beset inner-city African-American families and how they cope with those difficulties through family support and friendship, as well as presenting a picture of the increasingly ruthless, big-business tactics of college and even high school sports. It remains a seminal documentary film, both affecting and thought provoking in its story of lives and dreams entangled by forces beyond their control.

The product of 5 years of filming and 250 hours of footage, this documentary premiered at the 1994 Sundance Film Festival where it won the audience award.
In Chicago's inner-city, 14-year-olds William Gates and Arthur Agee are high school basketball players who dream of making it to the NBA. This compilation follows four years in their parallel lives, as William and Arthur go through trials and triumphs, successes and setbacks both on and off the court.

79%off
Something to Cheer About: Oscar Robertson and the Crispus...
$3.18 Winter Sale
Add to Cart

They Call Me Sirr
$9 Super Savings
Add to Cart