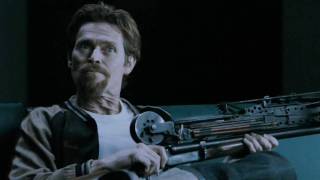 Box Office - 01/04/2010
3 stars out of 5 -- "DAYBREAKERS, a clever twist on the vampire legend, delivers what genre fans crave and more."
New York Times - 01/08/2010
"[T]his impressively stylized thriller envisions a world where vampires rule and humans run....The doomsday atmosphere and George Liddle's production design remain vivid until the final, blood-splattered reel."
USA Today - 01/07/2010
"[T]here are clever touches....Some intriguing social issues are raised."
Wall Street Journal - 01/08/2010
"[T]he German filmmaker brothers Michael and Peter Spierig have come up with a new twist in DAYBREAKERS....[With] some stylish action, accompanied by several solid performances..."
Hollywood Reporter - 01/07/2010
"[T]he setting is sleek and filled with clever details....The copious gore will appeal to hard-core horror buffs..."
Washington Post - 01/08/2010
"In one of the film's wickedly funny touches, vampire commuters are shown lining up for shots of the red stuff at a Starbucks-like blood bar."
Film Comment - 01/01/2010
"[A] slick, violent, and intensely gloomy horror/action/sci-fi hybrid that stands out in a crowded field of end-of-mankind movie scenarios."
Empire - 01/01/2010
3 stars out of 5 -- "There's a fascinating idea at the heart of DAYBREAKERS, where a vampire plague has swept the world and everyone's now a bloodsucker..."
Sight and Sound - 03/01/2010
"[I]t holds up a mirror to the ills of the past decade....It is also, thanks to the Spierigs' way with set-piece action and gory effects, a very enjoyable ride into the sunset."
Total Film - 05/17/2010
3 stars out of 5 -- "The Spierig brothers' sci-fi/horror genre bender unspools in a beautifully blue-tinted, Giger-esque near-future where all humans are vampires and blood is scarce."

It's 2017, and the undead far outnumber the living in this horror film starring Oscar nominee Ethan Hawke (TRAINING DAY). A virus has spread across the earth, turning its inhabitants into vampires. With their blood supply dwindling, the vampires must find a way to sustain their source of food.