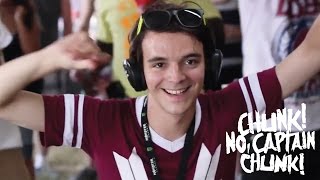 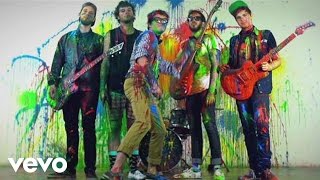 Lyricist: Chunk! No, Captain Chunk!.
Personnel: Bert Poncet (vocals); Eric Poncet, Paul Cordebard (guitar); Jonathan Donnaes (drums).
Audio Mixer: Joey Sturgis.
Recording information: 37 Studios; The Foundation Estate.
Photographer: Jonathan Weiner.
Pardon My French, the sophomore outing from the Goonies-loving, Parisian emo-punk-metal outfit Chunk! No, Captain Chunk!, sounds a whole lot like its predecessor, 2011's Something for Nothing. That's not such a bad thing, as the band's signature blend of punishing metalcore and peppy, melodic, and surprisingly good-natured punk-pop serves as an excellent tonic for listeners fatigued by the genre's penchant for pummeling its fans with machine-crafted breakdowns, soulless staccato riffage, and dirty-verse/clean-chorus whine sessions. That's not to say that the bandmembers don't operate under the same guidelines, but at least they've got the courage of their convictions. For the most part, Chunk! No, Captain Chunk! stick with the formula, offering up dirty, atonal intros that segue into meaty, throat-clearing verses that in turn give way to big, predictable choruses with familiar melodies, but the upside is that they do it with such panache that it's hard not to root for the results, even as they're slapping you in the face. Front-loaded with its two most obvious singles, the party anthem/generic call to arms "Restart" and the slick, radio-ready "Taking Chances," the rough-and-ready, relentlessly amiable Pardon My French (the title track opens with the most benevolent "go fuck yourself" ever put to tape) never really lets up, offering up a slew of high-energy, fireworks-heavy stadium jams that suggest that if fist pumping were an accepted aerobic exercise, Chunk! No, Captain Chunk! fans would have the buffest arms in all of rockdom. ~ James Christopher Monger