A family on the verge of a breakdown 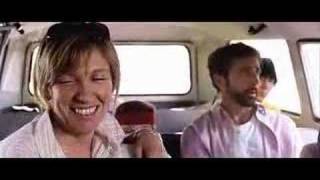 Picked up after a well-received showing at the 2006 Sundance Film Festival, LITTLE MISS SUNSHINE is a low-budget comedy about a family road trip from Albuquerque to California. The story begins when young Olive (Abigail Breslin) is given a shot at the Little Miss Sunshine beauty pageant, and manages to coerce her family into driving west in their worn-down VW van. Olive's father, Richard (Greg Kinnear), takes charge of the trip, while her mother, Sheryl (Toni Collette), brother Dwayne (Paul Dano), uncle Frank (Steve Carell), and eccentric grandfather (Alan Arkin) all come along for the ride. What follows resembles a budget-stricken version of PLANES, TRAINS AND AUTOMOBILES: seemingly endless (and hilarious) mishaps befall the family as they wind their way across the country. Couple this with the witty interplay between a well-drawn set of dysfunctional characters, and that's the LITTLE MISS SUNSHINE formula in a nutshell; all the audience needs to do is sit back and enjoy the ride.

The grainy texture of co-directors Jonathan Dayton and Valerie Faris's film may initially startle viewers unaccustomed to the indie film world. But its a testament to the cast and crew's efforts that the limitations imposed on the filmmakers are long forgotten by the end of the film. Any concerns about visual murkiness give way to belly laughs and bemusement as the road trip ends and the beauty pageant begins. Likely to have a broad appeal, Dayton and Faris's film resembles a version of NATIONAL LAMPOON'S VACATION directed with the pithy eye of Todd Solondz (WELCOME TO THE DOLLHOUSE), and it's to the movie's credit that it manages to successfully marry these two seemingly disparate worlds.