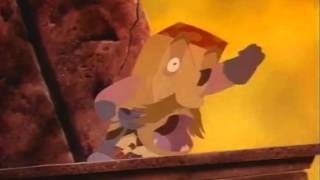 A paranoid young boy is swept into the animated worlds of fantasy, horror and adventure when he trapped inside a public library. Guided by three books, he battles his way to the exit and conquers his fears along the way. Features the voices of Whoopi Goldberg, Patrick Stewart, Leonard Nimoy and more.

Enter a magical world of adventure and fantasy! When Young Richard Tyler (Macaulay Culkin) takes shelter from a storm in an empty library, he is suddenly transported into the wondrous world of The Pagemaster'! Face-to-face with some of the world's most fearsome literary legends – mighty Moby Dick, treacherous Treasure Island pirates and even a fierce fire-breathing dragon – Richard must conquer his greatest fears, or he'll never get back home! Co-starring Christopher Lloyd, and featuring the voices of Whoopi Goldberg, Patrick Stewart and Leonard Nimoy, this live-action/animated adventure provides inspiration to the imagination and entertainment for the whole family!

To escape a raging thunderstorm, young Richard takes refuge in a library where he meets Mr. Dewey, a strange librarian. Dewey turns out to be The Pagemaster, a wizard who transports Richard into a colorful cartoon world. There, Richard is guided by three large walking, talking books named Adventure, Fantasy, and Horror, who send the boy on journeys with classic literary characters, such as Long John Silver, Dr. Jekyll/Mr. Hyde, and Captain Ahab. But despite the fun Richard is having in this fantasy world, he must also find the "Exit" sign -- his only means of escaping back to the real world.

16%off
Bedknobs and Broomsticks
$8.40 Super Savings
Add to Cart

16%off
The Indian in the Cupboard
$8.40 Super Savings
Add to Cart

A Troll in Central Park
$6 Super Savings
Add to Cart

Jack and the Beanstalk (DVD)
$13.70 Super Savings
Add to Cart