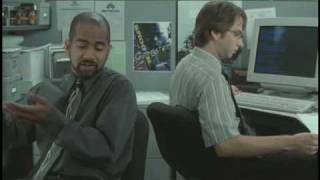 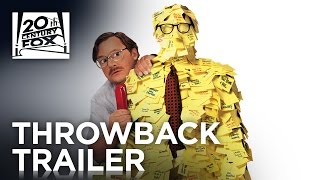 This geeky 1999 office comedy starring Ron Livingston as a corporate Everyman instantly gained cult status for its unabashed caricatures of office personalities, and its theme of corporate sabotage. Peter Gibbons (Livingston) is a typical middle manager living a mundane life amid a gray maze of cubicles. Everything in his life reeks of mediocrity, from the mid-size car he drives to the chain restaurant, Chotchky's (read: TGI Friday's), where he eats lunch every day. Even his apartment, a cookie-cutter duplex with walls so thin that he can chat with his next-door neighborhood through the plaster, is totally lacking in personality. The company where he works is peppered with ambitionless drones who blindly comply with the condescending requests made of them by their Porsche-driving CEO (Gary Cole). Then one day, Gibbons snaps. As a team of experts is brought in to enact large-scale layoffs, Gibbons simply stops trying and adopts an attitude of total disinterest. That is, he's only interested in dating the blond waitress (Jennifer Anniston) at the local restaurant, and putting in place a devilish scheme for some corporate payback.

OFFICE SPACE's writer-director Mike Judge (BEAVIS AND BUTT-HEAD), scares up some A-list laughs with this film, while also making an excellent parody of corporate culture. Released just as the dot-com boom began to go bust, with massive trends in corporate downsizing on the horizon, it could not have been better timed. Thus, while viewers will delight in the absurdity of the ultimate office loser Milton (Stephen Root), they will also identify with some frighteningly realistic aspects of the film.