When it comes to love, sometimes she just can't think straight. 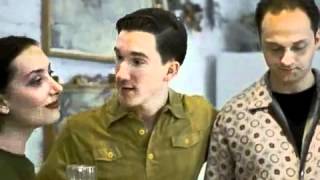 KISSING JESSICA STEIN: Jessica Stein (Jennifer Westfeldt) is a lovely young conservative Jewish girl with the perfect loft situated on New York City's Upper West Side, a fun job working for a hip newspaper, and beautiful clothes. The only thing she doesn't have is the ideal boyfriend. Not that she doesn't have tons of dates: from geeky nerds to suave sexy types, Jessica is sought after by throngs of men. She just doesn't like any of the guys who like her. When her coworker, Joan (Jackie Hoffman), reads her an ad from the personals of the Village Voice, Jessica knows she's interested. Even when she realizes that the ad is in the "women seeking women" section, she figures it's worth a try. A funny, girly, prissy, very lipstick-lesbian relationship ensues with Chelsea gallery owner Helen (Heather Juergensen). When the girls aren't making out, they share makeup secrets and raid each other's closets. However, Helen's daring nymphomaniac side clashes with Jessica's conservative straight side, and the couple is forced to face some real challenges, one of which is Jessica's hilarious Scarsdale-based matchmaker mother (Tovah Feldshuh). A light, laugh-a-minute romantic comedy, KISSING JESSICA STEIN is a good fit for fans of sitcoms like ALLY MCBEAL, SEX IN THE CITY, and WILL AND GRACE.

But I'm a Cheerleader
$12.80 Super Savings
Add to Cart