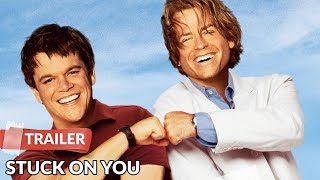 Following the outrageous comedies THERE'S SOMETHING ABOUT MARY, SHALLOW HAL, and DUMB AND DUMBER, the Farrelly brothers present yet another humorous romp with STUCK ON YOU. This time around a couple of conjoined twins (Greg Kinnear and Matt Damon) are the focus, and this premise provides for a relentless string of clever, absurd, and always-fresh jokes. Bob (Damon) and Walt (Kinnear) are living happy lives, perfectly content to be joined by a patch of skin that extends from armpit to hip and allows them to share a liver. Though they must do everything in tandem, they are best friends and treat each other as individuals with separate lives. Living on Martha's Vineyard, Bob (Damon) owns a popular local diner where he and Walt work as incredibly fast-moving short-order cooks with all four hands in perfect sync flipping burgers and slicing vegetables--this is one of the best gags in the film. However, as the brothers are shown playing hockey, fighting kung-fu style, cruising for babes in a bar, and taking on basically any other feat imaginable, the laughs only get better. Trouble comes when suave, confident Walt decides to pursue a Hollywood acting career, and Bob's stage fright, panic attacks, and shyness present a personality clash. Nonetheless, they get to meet Meryl Streep, they land a starring role in a television show with Cher, and they find some nice girlfriends. The Farellys keep their signature gross-out humor to a minimum with this likeable film, and provide some truly great, easily digestible physical comedy.

Once Upon a Time in Hollywood
$12.60 Super Savings
Add to Cart