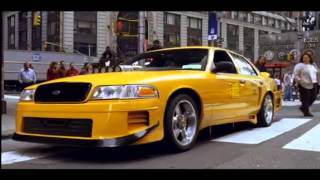 Jimmy Fallon gets his first starring role with TAXI, an action-packed comedy that finds the former Saturday Night Live showman teaming up with Oscar-nominated rapper-turned-actress Queen Latifah (CHICAGO). Fallon is Washburn, a truly pathetic New York City cop who can't seem to wake up in the morning without bumbling busts and breaking whatever he touches. After his most recent debacle, his boss and former flame, Lieutenant Marta Robbins (Jennifer Esposito), revoked his license. Latifah is Belle, a retired bike messenger who is about to fulfill a lifelong dream of becoming a bona fide cab driver. When Fallon commandeers Belle's services after hearing of a nearby bank robbery, a partnership is formed. Unfortunately, even when he means well, Washburn is nothing but trouble. Against her better judgment, Belle finds herself doing what she can to help out the pitiful Washburn, even though the bank robbers (led by supermodel Gisele Bundchen) are several steps ahead of the game. Produced by Luc Besson, who wrote the 1998 film upon which Tim Story's film is based, TAXI is an engaging romp that features likeable performances from its lead actors, as well as hilarious supporting turns from Ann-Margret and Adrian Martinez.