Tobacco lobbyist Nick Naylor is trying to SAVE YOUR ASH! 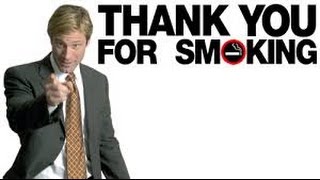 Jason Reitman has learned well. The son of director-producer Ivan Reitman (STRIPES, GHOSTBUSTERS) makes a strong impact with his debut feature film, the hysterical THANK YOU FOR SMOKING. Based on the wry novel by Christopher Buckley, THANK YOU FOR SMOKING is set in the fascinating world of Washington spin, where, more often than not, money trumps politics and morals. Aaron Eckhart (IN THE COMPANY OF MEN, ERIN BROCKOVICH) is outstanding as Nick Naylor, the public spokesman for Big Tobacco. The blond pretty boy has no problem whatsoever going on television and telling people that smoking can actually be good for them. He meets regularly with the M.O.D. Squad -- fellow Merchants of Death Polly Bailey (Maria Bello), who represents the alcohol business, and Bobby Jay Bliss (David Koechner), who defends firearms -- where they fight over who has the more difficult job based on the number of deaths their respective industries are responsible for. The smooth-talking Naylor's next big adversary is Vermont senator Ortolan Finistirre (William H. Macy), who is calling for the government to place a skull and crossbones and the word "Poison" on all cigarette boxes. At the same time, Naylor is sent out to Hollywood to make a deal with high-powered agent Jeff Megall (Rob Lowe) to get more stars to smoke in movies, like in the good old days. All the while, Naylor is trying to establish a better relationship with his young son, Joey (Cameron Bright), without playing down his highly questionable job. The strong cast also includes Kim Dickens as Naylor's ex-wife, J.K. Simmons as his boss, Katie Holmes as a sexy reporter, Sam Elliott as the former Marlboro Man now dying of lung cancer, and Robert Duvall as the Captain, an old-time tobacco chief who takes Naylor under his wings. THANK YOU FOR SMOKING is a very funny satire that will leave audiences gasping for breath from laughing so hard.

Theatrical Release | Fathers And Sons | Based On A Novel