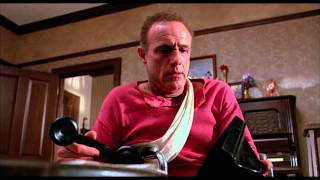 "You're a dirty little birdy."
- Annie Wilkes (Kathy Bates) to Paul Sheldon (James Caan)
"It's a masterpiece! What was the name of that ceiling painted by that dago'"--Annie "The Sistine Chapel'"--Paul
"Yes. You and Michaelangelo. Geniuses."
- Annie
"I'm your number one fan."
- Annie to Paul

Romance author Paul Sheldon (James Caan) longs for parting with Misery. Sheldon's plucky heroine of seven novels has delivered Sheldon fame and fortune and recognition beyond the average writer's dreams, but she is also interminably linked to him. Determined to escape an eternal role as dimestore novelist, he kills her off in the eighth novel and heads to his New England cabin to work on his own Great American Novel. Upon completion, Sheldon excitedly sets out for his New York City publisher in the midst of a raging blizzard and within minutes veers into a desolate snowbank. From the brink of death, he is rescued from the snow by Annie Wilkes (Kathy Bates), who just so happens to be Misery's self-professed biggest fan. At first, she nurses him back to health in her remote cabin, telling him the roads and phones are knocked out by the storm, fawning over his literary accomplishments. However, things change when she purchases his eighth Misery book and reaches the point of Misery's death. Annie's psychotic underbelly swiftly surfaces as the unfortunate author is held clandestinely captive in her home. Meanwhile, a wily small-town sheriff (Richard Farnsworth) circles in....

Director Rob Reiner's adaptation of Stephen King's novel is an eerie tale of obsessiveness and isolation. The film features an excellent turn by Caan and an Oscar-winning performance by Bates.

In this chilling adaptation of a Stephen King story, a romance novelist loses control of his car during a snowstorm and is rescued by a nurse who happens to be his "number one fan." Recovering in her home, he turns from patient to prisoner as his savior proves to be psychotically deranged.