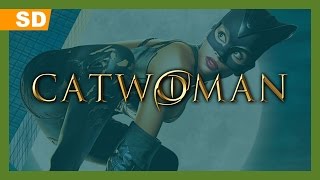 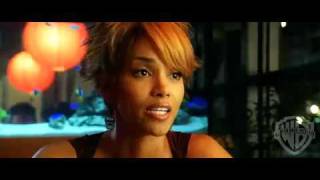 Patience Philips is a shy, reserved young woman who wants to be an artist but instead is a designer for an advertising company. She is mousy and lacking in self-esteem even when she gets her big break to work on the launch of a major beauty product for her mean-spirited, ruthless boss. But a series of events initiated by a mysterious cat results in her discovering a terrifying secret that leads to her murder. That same cat breathes new life into her, creating a strong, brave woman within her that wrestles with her previous self for control of her mind and body--a body that can now do amazing things.

Academy Award winner Halle Berry is captivating as Patience, a female superhero for the 21st century. She is fearless as she seeks revenge on the people who killed her, and she attempts to save the public from the release of a dangerous product. As the Catwoman side of her battles George Hedare (Lambert Wilson) and his wife, Laurel (Sharon Stone), who he has decided is now too old to be the face of his company, the Patience side of her gets involved with hot cop Tom Lone (Benjamin Bratt), who is caught in the middle of her two-sided personality. First-time director Pitof keeps things moving at a fast pace, with quick cuts, sweeping camerawork, and pounding music. Alex Borstein provides comic relief as Patience's best friend, and SIX FEET UNDER's Frances Conroy plays a cat lady who knows the secret history of felines through the ages.

Catwoman is the story of meek, mild-mannered artist Patience Philips, who works for Hedare Beauty, a mammoth cosmetics company on the verge of releasing a revolutionary anti-aging product. When Patience inadvertently happens upon a dark secret her employer is hiding, she is attacked and killed. But Patience is given a second chance - a second life in which someone not quite human resides. Someone with the strength, speed, agility and ultra-keen senses of a cat. With her newfound power, Patience becomes Catwoman, and sets out to stop Hedare's callous plan to unleash an appallingly dangerous product into the world.