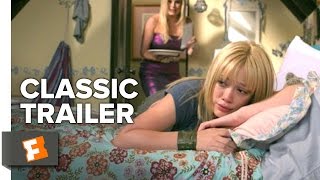 Hilary Duff plays Sam, a good-hearted Cinderella stuck in the fairy-tale-gone-wrong atmosphere of modern-day Los Angeles. Enslaved by an evil, BOTOX-junky step-mom (a hilarious Jennifer Coolidge) Sam is forced to scrub floors at her late father's diner, thus earning the eternal disdain of the snooty popular kids in school. Luckily she has a friend in artsy nerd Carter (Dan Byrd), and a text-message romance with some poetic schoolmate she's never met. She also has a fairy godmother in the sweet diner manager (Regina King), who helps Sam get decked out and disguised for the Halloween dance. At the dance, she discovers her prince is one of the popular kids, Austin Ames (Chad Michael Murray). Happily ever after seems like a long shot, though, because Austin is burdened by pressures at school and at home, and Sam can't shake her "diner girl" inferiority complex.

This fairy tale comes with plenty of wit, style, and heart. It moves along too fast to be sappy, and broadly razzes the shallowness of popular kids, their stupid parents, and whiny siblings in a way that should balm the unhealed wounds of anyone who's ever been to high school. Byrd makes a winning and somewhat cool nerd, Murray shows princely posture as the tortured poet-quarterback, and Duff firmly establishes herself as a first-rate young actress with luminous major-league screen presence.

24%off
A Cinderella Story: Once Upon a Song
$9.80 Super Savings
Add to Cart

Aliens in the Attic (DVD)
$5.80 Super Savings
Add to Cart