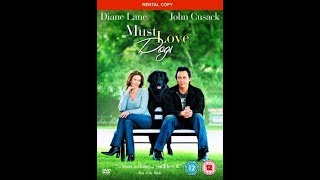 John Cusack and Diane Lane star in this romantic comedy titled after a personal ad on the Internet. Eight months after getting divorced, downtrodden preschool teacher Sarah (Lane) is wary of re-entering the dating pool. Seeing her reluctance as a cry for help, Sarah's large, jovial family plans an intervention. While Sarah does not appreciate being bombarded by photographs and phone numbers of potential mates (half of whom are married), even she can see that her most meaningful relationship should not be with her brother's dog--a loveable Newfoundland named Mother Theresa. After Sara answers personal ads with less-than-thrilling results, her sister Carol (Elizabeth Perkins) takes things into her own hands, secretly posting an online-dating profile on Sarah's behalf. In a familiar montage of first-date scenarios, Sarah meets one unappealing prospective bachelor after another: one who can't stop talking about himself, another who can't stop crying, one with an affinity for bondage, etc. But when she meets recently divorced Jake (Cusack), something clicks. While their meeting is somewhat awkward, it makes enough of an impression on Jake that he wants a second chance. From here, the two embark on a clumsy courtship complicated by misunderstandings, mishaps, and another equally charming suitor, Bob (Dermot Mulroney). While doing her best to navigate the unfamiliar world of modern-day romance, Sarah learns that sometimes finding Mr. Right means taking a chance. Christopher Plummer and Stockard Channing are excellent in their respective roles as Sarah's widowed father, Bill, and his new girlfriend (a compulsive Internet-dater) Dolly.

Must Love Dogs
Must Love Dogs tells the story of Sarah Nolan (Diane Lane), a newly divorced woman cautiously rediscovering romance with the enthusiastic but often misguided help of her well-meaning family. As she braves a series of hilarious disastrous mismatches and first dates, Sarah begins to trust her own instincts again and learns that. no matter what, it's never a good idea to give up on love.

Down With Love
99¢ Spring Sale
Add to Cart