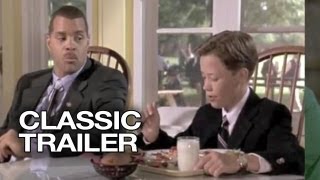 A wise-cracking Secret Service Agent with hopes of one day being assigned to protect the President gets more than he bargained for when he's ordered instead to protect his precocious son. Though leery of one another at first, the two eventually develop a strong bond of friendship--and thwart a plot against the First Family in the bargain!

First Kid
Sinbad plays wisecracking Secret Service agent Sam Simms, assigned to protect the President's rebellious 14-year-old son Luke (THE MIGHTY DUCKS' Brock Pierce). Simms would much rather be protecting the President, and Luke would prefer to be just a regular kid without a watchdog trailing him everywhere he goes. But a genuine friendship develops between the two when Simms volunteers to teach Luke how to deal with a school bully (HOME IMPROVEMENT'S Zachery Ty Bryan), and to untie his tongue so that he can win over a cute girl in class. But when Luke's mysterious Internet buddy convinces him to ditch his bodyguard in a crowded mall, the fun and games suddenly become a matter of life and death! The votes are in from both audiences and critics -- "Sinbad is hilarious" (KNX Radio/CBS Radio) in this "laugh-a-minute" comedy (Sneak Previews).

It's not easy being the teenage son of the President, as lonely, bored Luke Davenport can attest to. But the misunderstood boy finds a friend in fellow misfit Sam Simms, the brash Secret Service agent assigned to protect him. Sam helps the lad cope with bullies, his first date, and the growing pains of adolescence. In the process, the unlikely pair form a lasting bond that enriches them both.