The Greatest Game Ever Played PG 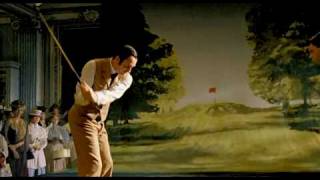 The Greatest Game Ever Played [Trailer]

The second film directed by actor Bill Paxton is a marked departure--in both form and content--from his debut, 2001's FRAILTY, a shadowy, gothic tale of murder. THE GREATEST GAME EVER PLAYED is a sports movie slash Horatio Alger rags-to-riches tale with undertones of class consciousness and social critique. The story is based on a real-life event--the 1913 U.S. Open golf championship--at which two equally sympathetic young men, both of whom grew up economically and socially disadvantaged, go club to club in one of the most exciting and dramatic athletic events of the early 20th century.

The film focuses on the competition between the British star Harry Vardon (Stephen Dillane) and the young American prodigy Francis Ouimet (HOLES star Shia LaBoeuf). Though they hail from opposite sides of the Atlantic, the struggles that the two young golfers have had to overcome are markedly similar; both grew up in hard-scrabble, working-class homes that happened to be adjacent to golf courses, and both were preternaturally disposed to the game. In addition, both must defy the disdain of the golfing gentry. Vardon is already a reigning champion and international darling when Ouimet makes it to his first tournament to battle him. Though enough backstory is provided to connect the viewers to the characters, the meat of the film is the dramatic unfolding of the tournament. With expert editing and fluid camera work, Paxton films close-up views of the golfing action in a manner that recalls the kinetic pool shots in Martin Scorsese's THE COLOR OF MONEY. With each stroke, the competition becomes closer and the mood more tense, culminating in an explosive outcome that, while not unexpected, pulls at the heartstrings as do all good tales of triumph over adversity.

The Legend of Bagger Vance
$10
Add to Cart