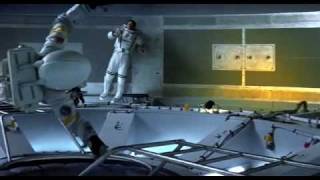 In 2020, a group of astronauts headed by Luke Graham (Don Cheadle) set out to be the first humans on Mars. After they've landed, they investigate a strange noise near an unusual rock formation, and an unpredicted storm conjures up a living tunnel of sand that wipes out everyone except Graham. His pals back on a space station near Earth spring to his rescue despite the concern of their stodgy Russian captain (Peter Outerbridge) that in the year it will take to reach him, Graham will likely die. Nonetheless, they have to try it. Manning the spacecraft is Jim McConnell (Gary Sinise), a shaky but brilliant space cadet mourning the death of his wife (Kim Delaney); newcomer Phil (Jerry O'Connell); and married astronauts Woody (Tim Robbins) and Terri (Connie Nielsen). After various catastrophic setbacks, they make it to Mars in time to discover some shocking secrets, including the very origin of life in the universe. Highlighted by staggering special effects, this ambitious Brian De Palma film straddles the void between Kubrick's 2001: A SPACE ODYSSEY and Cameron's THE ABYSS, with imaginative results. The music is by Ennio Morricone.

Mission To Mars
From the director of MISSION: IMPOSSIBLE comes the thrilling, eye-popping science fiction adventure MISSION TO MARS, starring Gary Sinise (SNAKE EYES) and Tim Robbins (HIGH FIDELITY). The year is 2020, and the first manned mission to Mars, commanded by Luke Graham (Don Cheadle, OCEANS 11), lands safely on the red planet. But the Martian landscape harbors a bizarre and shocking secret that leads to a mysterious disaster so catastrophic, it decimates the crew. Haunted by a cryptic last message from Graham, NASA launches the Mars Recovery Mission to investigate and bring back survivors -- if there are any. Confronted with nearly insurmountable dangers, but propelled by deep friendship, the team finally lands on Mars and makes a discovery so amazing, it takes your breath away. MISSION TO MARS is an action-packed rocket ride that will enthrall you with its stunning special effects and keep you on the edge of your seat.

After the first manned mission to Mars ends in a mysterious catastrophe, a new crew is assembled and sent into space to track down the missing astronaut and find out what really transpired. The crew includes a recently widowed husband, a married couple, and a fresh-faced upstart. Brian De Palma's big-budget thriller is aided greatly by its overflowing star power--in the form of the actors--as well as its spectacular visual effects.