They thought he couldn't do the job. That's why they chose him. 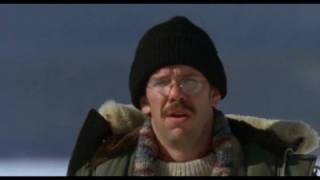 Carroll Ballard follows up his beloved THE BLACK STALLION with NEVER CRY WOLF, another inspiring adventure story that deals with the all-important concept of man versus nature. The film opens as the government dispatches Tyler (Charles Martin Smith), a solitary biologist, into the frozen wilds of the Yukon, to determine whether aggressive wolves are the reason for a greatly reduced caribou population in the region. During the course of his lonely assignment, the bespectacled scientist comes to understand the wolves' world, respect it, and even want to be a part of it. Not surprisingly, he also discovers that the white man is responsible for the caribou's depleted numbers--not the vilified wolves. When it appears that a group of angry hunters are going to ruthlessly murder any wolf that they see, he is forced to take a stance once and for all, endangering his own life in the process.
Ballard's visual epic, gorgeously photographed by Hiro Narita, proves his overflowing skill as a director. Once again, he chooses to rely on imagery to tell his story, rather than drowning out the visuals with unnecessary dialogue. Smith's inspired performance allows the audience to slip inside his mind, resulting in a deeply personal viewing experience.

Never Cry Wolf
Filmed amid spectacular wilderness vistas, NEVER CRY WOLF reveals a world of hypnotic beauty and breathtaking cinematic imagery. An unforgettable adventure begins as Tyler, a young inexperienced biologist, is deposited alone onto the desolate Arctic terrain. Once settled, he struggles to endure the forces of nature as he documents the mysterious habits of the wolves he has been sent to study. An odyssey of self-discovery told through captivating drama, NEVER CRY WOLF is a haunting, lyrical film from the director of THE BLACK STALLION.

Eskimo
$18 on Sale
Add to Cart

16%off
The Incredible Journey (DVD)
$8.40 Super Savings
Add to Cart