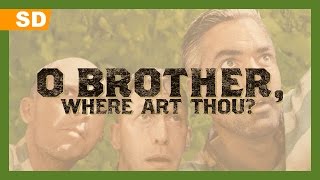 Joel and Ethan Coen transport Homer's ODYSSEY to the depression-era South in the silly, fun comedy O BROTHER, WHERE ART THOU' George Clooney, John Turturro, and Tim Blake Nelson star as three escaped fugitives on the run in Mississippi. Their adventures through the barren landscape includes run-ins with a soothsayer, a trio of Sirens, a Bible-salesman Cyclops, as well as other archetypes from Southern folklore and pop-culture including a young blues musician, the Klan, and bank robber Baby Face Nelson. Soon they are caught up in a vicious gubernatorial campaign that would make Huey Long proud.

The Coen brothers mix in a host of cinematic references in O BROTHER, including SULLIVAN'S TRAVELS, COOL HAND LUKE, I AM A FUGITIVE FROM A CHAIN GANG, and even dashes of the Three Stooges. The soundtrack of folk ballads, yodeling traditionals, Delta blues, and prison work songs is outstanding, playing in the background (or foreground) of nearly every scene. Clooney, as the ringleader, displays an effervescent smile that is as intoxicating as the Coens' script is outrageous. The cast, including Holly Hunter, Charles Durning, John Goodman, Chris Thomas King, and Michael Badalucco, is charmingly bewildering in a way that only a Coen brothers' cast can be. Joel and Ethan have done it again, crafting this time a unique film steeped in the traditions of the South--and of Hollywood itself.

O Brother, Where Art Thou'
Disenchanted with the daily drudge of crushing rocks on a prison farm in Mississippi, the dapper, silver-tongued Ulysses Everett McGill (George Clooney, THE PERFECT STORM) busts loose. Except he's still shackled to his own chain-mates from the chain gang -- bad-tempered Pete (John Turturro, SUMMER OF SAM), and sweet, dimwitted Delmar (Tim Blake Nelson, HAMLET). With nothing to lose and buried loot to regain -- before it's lost forever in a flood -- the three embark on the adventure of a lifetime in this hilarious offbeat road picture. Populated with strange characters, including a blind prophet, sexy sirens, and a one-eyed Bible salesman (John Goodman, COYOTE UGLY), it's an odyssey filled with chases, close calls, near misses, and betrayal that will leave you laughing at every outrageous and surprising twist and turn.