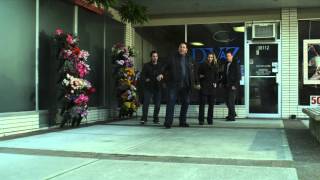 End of the World - Trailer

A comet hurtling towards the Earth spells disaster in this one-of-a-kind exploitation film compiled from footage shot by legendary French director Abel Gance! Famed astronomer Martial Novalic learns that Lexell's Comet, which last passed the Earth in 1770, is on a collision course with our planet. Only 10 days remain before civilization is completely destroyed. The scientist announces his findings via radio, causing worldwide panic. While a defeated populace gives in to wanton debauchery, Novalic assembles the world's top scientists into a "Universal Republic" in hopes that mankind can be preserved. But even if by some miracle the holocaust can be averted, the revolting citizenry may already have reduced the planet to ashes...

The End of the World began as La Fin du monde, Abel Gance's planned follow-up to his masterpiece Napoleon (1927). Intended as the director's definitive statement on the last days of the human race, a spiraling out of control budget meant that the film was taken away from him by the producers. Released in a 105 minute version (truncated from Gance's planned three hours) La Fin du monde met with disastrous reviews upon its 1931 release in France. Enticed by its spectacular scenes of destruction, exploitation producer Harold Auten then purchased the American distribution rights. Shortening the film even further, he cut out almost all of Gance's characters and filled in the narrative blanks with newly written intertitles, creating in effect an hour-long cinematic montage of planetary apocalypse. He also removed Gance's screen credit; the director of the film was now listed as the mysterious "Doctor V. Ivanoff". A new prologue, similar to the one in Frankenstein (1931), was shot with the first chairman of the Hayden Planetarium, Dr. Clyde Fisher, testifying to the scientific accuracy of the film. In this form, the movie became a roadshow attraction that toured mostly rural areas. A unique example of cultural appropriation, The End of the World can be enjoyed today as an unusual artifact of an earlier era while still appreciating the artistry (however amended) of Abel Gance.

Note: Due to the age and rarity of this film, some picture anomalies exist.

Disaster | Post-Apocalypse | Science-Fiction | France | Scientists | Disasters
This product is made-on-demand by the manufacturer using DVD-R recordable media. Almost all DVD players can play DVD-Rs (except for some older models made before 2000) - please consult your owner's manual for formats compatible with your player. These DVD-Rs may not play on all computers or DVD player/recorders. To address this, the manufacturer recommends viewing this product on a DVD player that does not have recording capability.

Customer Rating:
Based on 2 ratings.


I am a fan of exploitation films and this flick delivered! I have not seen the original film so I do not know how it compares but this version, there is very little of the story. It's basically a hour long count down of events leading up to the comet's arrival. There are scenes with scientists that make up the "story" but it's basically panic scenes / panic scenes / scientists / panic scenes, etc... lol That being said, the movie is VERY fast paced and does not let up. I highly enjoyed it. Will need to track down the original version sometime and see how the "story" actually unfolds. Fans of bizarre early films will really like this.