It can take a lifetime to find true love; she's got 30 days! 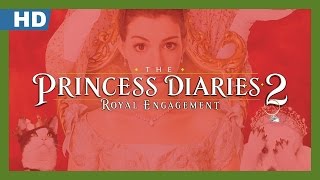 As a teenager, ugly duckling Mia (Anne Hathaway) learned that she was actually a princess. Now that the Princess has completed college in America, she is returning to her country, Genovia. Since Mia is turning 21, Queen Clarisse (Julie Andrews) plans to step down and give her granddaughter the throne. But evil Viscount Mabrey (Jonathan Rhys-Davies) believes his nephew is the rightful heir, and Parliament decides that Mia will have to abide by an age-old Genovian law: no Queen shall rule without a husband. Mia has just thirty days to marry if she is to retain the throne that her family has held for over 500 years. The kindhearted but clumsy princess also has to win over the Genovian people and survive the constant paparazzi. Although a charming Englishman (Callum Blue) seems to fit the arranged marriage bill, Mia also finds herself drawn to the very man that is vying for the throne, the dashing Nicholas (Chris Pine). But can she trust her foe's intentions' Will Mia follow her heart, or sacrifice love for her country' Gary Marshall directs this fun romp-with-royalty that also features Heather Matarazzo and Hector Elizondo.

The Princess Diaries 2: Royal Engagement
Starring the irresistible Anne Hathaway (ELLA ENCHANTED) and Academy Award(R) winner Julie Andrews (Best Actress, MARY POPPINS, 1964), this modern-day fairy tale picks up right where THE PRINCESS DIARIES left off! As future queen of Genovia, Princess Mia (Hathaway) has everything a girl could want -- except the magical romance she's always dreamed of. But soon, Mia's shocked to discover that she needs to get married right now or her family will lose the crown! Comic complications rule the day in this delightful family story about finding out who you really are and discovering what it takes to make your dreams come true!