A Royal Kick In The Arse.

432K ratings
Out of Print: Future availability is unknown
Notify Me When Available
Add to Wishlist
Format:  DVD
sku:  AVRX
92% recommend us! 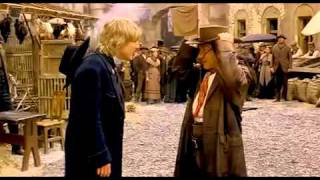 In this entertaining sequel to SHANGHAI NOON, Chon Wang (Jackie Chan) and Roy O'Bannon (Owen Wilson) are reunited on an adventure that leads them to Great Britain. Upon hearing of his father's murder in China at the hands of Englishman Lord Rathbone (Aidan Gillen), Wang leaves his law-enforcing life in Nevada and heads east. In New York City, he tracks down Roy, who now works as a waiter/gigolo. After a close encounter with New York's finest, Wang and Roy travel to London, where they team up with Wang's sister, Lin (Fann Wong), also out to avenge their father's death. Their search uncovers a plot to assassinate the royal family and brings them into contact with many touchstones of turn-of-the-20th-century British culture.

A fitting follow-up to Chan and Wilson's first pairing, SHANGHAI KNIGHTS takes the fish-out-of-water element of the original and doubles it, as both Wang and Roy navigate the highs and lows of Victorian London. Chan, as always, astounds with a series of acrobatic fight sequences that involves unusual accessories such as revolving doors, fruit stands, and Chinese vases. And Wilson once again aptly fills the role of the wisecracking opportunist with a conscience who has a wry quip for every occasion. Meanwhile, Fann Wong is luminous as Wang's high-kicking sister; Aidan Gillen sneers superbly as the scheming Rathbone, and Hong Kong legend Donnie Yen makes the most of his small role as Rathbone's co-conspirator. In addition to incorporating Sir Arthur Conan Doyle, Charlie Chaplin, and Jack the Ripper into the story, David Dobkin's amusing film also features knowing nods to SINGING IN THE RAIN and the Harold Lloyd classic SAFETY LAST.

Shanghai Knights
Jackie Chan (RUSH HOUR 2) and Owen Wilson (THE ROYAL TENENBAUMS) jump back in the saddle for SHANGHAI KNIGHTS, the hilarious sequel to the hit action-comedy SHANGHAI NOON. When Chon Wang (Chan) gets news of his estranged father's murder in Shanghai, he leaves his honorable life as Carson City's sheriff in a cloud of dust and reunites with his yarn-spinning sidekick, Roy O'Bannon (Wilson). Together they make their way to London on a daring quest for honor and revenge. Hilarious escapades and hair-raising adventures ensue as our heroes find themselves in the middle of a devious plot to eliminate the entire royal family. And Chon gives Victorian Britain a royal kick in the pants as he tries to avenge his father's death and keep love-struck Roy away from his sister!