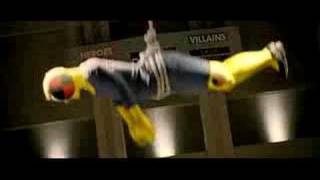 Most teenagers cringe at the thought of meeting their parents' high expectations--good grades, well-behaved friends, and a plan for the future--and none more so than Will Stronghold (Michael Angarano), the son of legendary superheroes Commander (Kurt Russell) and Jetstream (Kelly Preston). This clever Disney comedy follows Will from his first day as star student at Sky High, an elite school for the children of superheroes. The only problem is that Will apparently has no special powers, and he can't let his parents find out! Lacking the abilities needed to attend hero classes, Will falls in with the misfit sidekicks, whose only powers include turning into a guinea pig, glowing, and melting. However, when an old villain with a new power reappears on the scene, the pressure is on Will and his sidekicks to save his parents, his school, and the earth itself.

Perhaps as a tribute to the classic era of teen films, SKY HIGH features a soundtrack bursting with 1980s hits covered by contemporary artists, including Flashlight Brown, Bowling for Soup, and Vitamin C. The film also features performances that will please adult viewers, including a cameo as the school principal by former Wonder Woman Lynda Carter, comedian Dave Foley as a washed up sidekick, and EVIL DEAD star Bruce Campbell as Coach Boomer. Truly fun for all ages, the charming teen stars, fast pace, and universal story make SKY HIGH a clear family classic on par with SIXTEEN CANDLES, SPY KIDS, and NATIONAL LAMPOON'S VACATION.

The Adventures of Sharkboy and Lavagirl (Blu-ray)
$11.80
Add to Cart

The Adventures of Sharkboy and Lavagirl
$10
Add to Cart

80%off
Matty Hanson and the Invisibility Ray (DVD)
$3.98 BLACK FRIDAY
Add to Cart