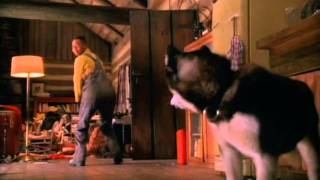 Director Brian Levant (BEETHOVEN) goes to the dogs again in Disney's SNOW DOGS. Cuba Gooding, Jr. stars as Ted Brooks, a successful Miami dentist who finds out that he was adopted, and has to travel to Alaska for the reading of his birth mother's will. There, he meets the small community of crazies that were his mother's friends. Barb (Joanna Bacalso), a beautiful bar owner, is the most welcoming. Ted learns that he has inherited his mother's property, including her team of rambunctious sled dogs. A crusty old-timer, Thunder Jack (James Coburn), tries to buy the dogs, but Ted decides he will learn how to race a dogsled, and enter the Arctic Challenge, a local race. Handling the mischievous pooches, particularly the "alpha" dog, Demon, turns out to be much harder than expected. Levant keeps the action moving at a swift pace, particularly during Ted's hilariously disastrous first run with the dogs. Gooding clowns like a pro, and Coburn is wonderful as the grizzled dogsled veteran. Kids will fall in love with all the dogs, who are given animated facial expressions. Nichelle Nichols (of STAR TREK fame) plays Ted's mom, and pop star Sisqo plays his best friend back in Miami.

Snow Dogs
Make no bones about it -- Disney's SNOW DOGS is a hilarious action-packed comedy your whole family will love. Eight adorable but mischievous dogs get the best of dog hater Ted Brooks (Cuba Gooding Jr.) when he leaves his successful Miami Beach dental practice for the wilds of Alaska to claim his inheritance -- seven Siberian huskies and a border collie -- and discover his roots. As Ted's life goes to the dogs, he rises to the occasion and vows to learn to mush with his inheritance. Totally out of his element, he faces challenges he's never dreamed of. There's a blizzard, thin ice, an intimidating crusty old mountain man named Thunder Jack (James Coburn), the Arctic Challenge Sled Dog Race that's only two weeks away, and a life-and-death rescue. This fish-out-of water, tail-wagging comedy is nothing but doggone good fun and a celebration of family -- both human and canine!

George of the Jungle
$6 Super Savings
Add to Cart