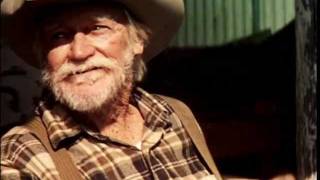 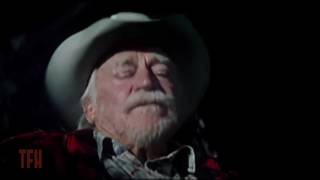 "When my kids were real little I used to play a game with them. I'd give each one of them a stick and I'd say, 'You break that.' Of course they could real easy. Then I'd say, 'Tie them sticks in a bundle and try to break that.' Of course, they couldn't. Then I'd say, 'That bundle...that's family."
- Alvin Straight (Richard Farnsworth) to a runaway girl
"How long have you been on the road'"--Bud (Joseph A. Carpenter)
"Five weeks."--Alvin
"Haven't you been scared being alone'"--Dorothy (Jane Heitz)
"I fought in the trenches in World War II. Why should I be scared of an Iowa cornfield'"
- Alvin
"I couldn't help but notice the rather unusal mode of transport."--Priest (John Lordan)
"My eyes are bad. I can't drive. I don't like someone else driving. And I've got to get out to my brother's."
- Alvin

David Lynch's first foray into the land of Disney and G-ratings is a surprisingly gentle, hopeful, and irony-free crowd pleaser. The film tells the true story of Alvin Straight (Richard Farnsworth), a 73-year-old man who journeys from Laurens, Iowa, to Mt. Zion, Wisconsin, on a John Deere lawn mower in order to visit his dying older brother, Lyle (Harry Dean Stanton). The estranged brothers haven't spoken in years because of their stubborn pride, but Lyle's recent stroke convinces Alvin that now is the time to make amends. Along the way he meets a host of interesting characters--including a pregnant runaway teenager, a sad World War II veteran, and a sympathetic priest--affecting them deeply with his unflinching spirit and belief in the power of familial love. As Straight, Farnsworth slips into the role he was born to play with an effortless grace. Sissy Spacek gives a heartbreaking turn as his afflicted daughter, Rose, who looks after her father and mourns for her children, who were cruelly taken away from her after a freak fire threatened their well-being. Angelo Badalamenti's acoustic, string-heavy score, coupled with 81-year-old Freddie Francis's golden cinematography, adds an even deeper grace to Lynch's touching family drama.

The Straight Story
Based on the true story that captured the hearts of America, THE STRAIGHT STORY is one of those rare films offering powerful, uplifting entertainment for audiences of all ages. Directed by acclaimed director David Lynch (WILD AT HEART, MULHOLLAND DRIVE), this gentle, inspiring film celebrates the human spirit. Richard Farnsworth (MISERY, THE NATURAL) stars as Alvin Straight -- a no-nonsense man who has never been one to lean on others. Now at an age when his eyesight denies him the ability to drive and walking is accomplished only with the help of two canes, Alvin lives a quiet life with his daughter Rose (Sissy Spacek). But when the call comes that Alvin's estranged brother Lyle (Harry Dean Stanton, THE GREEN MILE) has suffered a debilitating stroke, Alvin embarks on a dangerous and emotional journey to make amends. With little money, but plenty of patience and tenacity, he climbs aboard his 1966 John Deere lawnmower and plots the 260-mile course from his small Iowa town to Lyle's home in Wisconsin. Filmed along the actual route that the real Alvin Straight traveled in 1994, THE STRAIGHT STORY is a heartwarming and poignant drama chronicling Alvin's six-week odyssey and the many lives he touches along the way.

David Lynch does a 180-degree turn and comes up with a beautiful family film that preaches the power of love and forgiveness. Based on a true story, THE STRAIGHT STORY follows Alvin Straight, a stubborn 73-year-old Iowa man who learns that his brother has just suffered a stroke. Although the brothers haven't spoken in years, Alvin decides to travel to Wisconsin to reunite with him. Armed with a cooler of hot dogs and a U-Haul trailer, Alvin climbs aboard a John Deere lawn mower and begins his inspiring journey.

Standing in the Shadows of Motown (2-DVD)
$8.40 Super Savings
Add to Cart