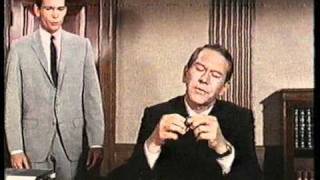 When Patti's cat turns up with a missing woman's watch around its neck, Patti is convinced that the cat knows where the kidnapped woman is being held. An allergic federal agent is assigned to the case, and fun and romance ensue.

That Darn Cat!
The fur flies when a smart Siamese cat goes undercover and Hayley Mills and Dean Jones team up for mystery, adventure, and wild comedy on Disney DVD. When the irrepressible and always hungry D.C. (Darn Cat) turns up with a wristwatch for a collar, it becomes a tip-off to an unsolved robbery and kidnapping. You don't know who's tailing who as nosy neighbors, jealous boyfriends, and a highly allergic FBI agent play a game of cat and mouse to crack the baffling case. Don't miss the spectacular supporting cast featuring Dorothy Provine, Roddy McDowall, Frank Gorshin, and Ed Wynn, plus 100 purr-cent feline family fun!

When a bank teller is kidnapped during a robbery, she slips her watch around a stray cat's neck in hopes that it will lead to her rescue. Fortunately, the cat wanders into the home of Patti Randall, who recognizes the watch's significance and pushes the FBI into action.

The Absent-Minded Professor
$14.50
Add to Cart

The Incredible Journey
$10
Add to Cart