The Three Lives of Thomasina PG 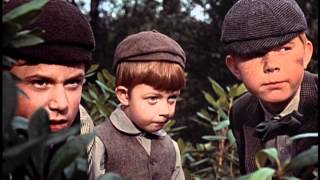 A charming, excellently acted live-action Disney drama about a young Scottish girl's love for her cat, THE THREE LIVES OF THOMASINA deals with complex issues of death and parent-child relationships without being scary or needlessly sentimental. Mary MacDhui (Karen Dotrice), lives in a rural village with her veterinarian father Andrew (Patrick McGoohan), a bitter, faithless widower who is criticized by his assistant for having no feelings towards the animals he treats. Mary's only real object of affection is her self-absorbed marmalade cat, Thomasina (enhanced by the narration of Elspeth March). When the town blind man's dog is critically injured, Andrew does his duty. At the same time, however, Thomasina has fallen ill with tetanus, his frantic daughter interrupting the dog's surgery and begging Andrew to save her. Impatient and busy, Andrew euthanizes Thomasina. The distraught Mary is temporarily consoled by an elaborate funeral march planned by her concerned friends (Jack Stewart, Matthew Garber, and Denis Gilmore), but is so angry and sad that she disowns Andrew. Thomasina herself soon finds herself in kitty heaven, in a memorable scene of Egyptian cat-goddess statues and hundreds of regal-looking Siamese. However, she is back with the living again when a young, solitary woman who cures sick animals named Lori (Susan Hampshire), thought to be a witch, notices at the grave site that the cat is not, in fact, dead, the act helping the lives of Lori, Thomasina, Mary, and her father, to become entwined.

The Three Lives Of Thomasina
Set against the beauty of the Scottish Highlands, Paul Gallico's best-selling story of a little girl's undying love for her cat comes wonderfully to life in this classic Disney adaptation. Tragedy strikes when Mary McDhui (Karen Dotrice) finds her beloved Thomasina seriously injured. Not even her stern father, a widowed veterinarian (Patrick McGoohan), can save the pet. Their only hope lies in a mysterious "witch" and the healing power of love. Conjuring up both tears and laughter, this tender film has a magical charm that will linger long in your heart.

The Misadventures of Merlin Jones (DVD)
$10
Add to Cart