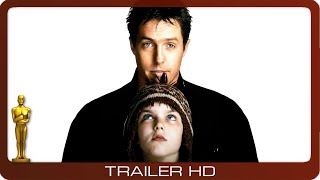 ABOUT A BOY, directed by Chris and Paul Weitz, stars Hugh Grant as Will Freeman, a proudly self-absorbed 38-year-old Londoner. Living lavishly off the royalties from a hit Christmas song penned by his father, Will excels at nothing except doing nothing, which, in his case, includes shopping for CDs and having his hair "professionally disheveled." When Will makes a guilt-free exit from a brief fling with a single mom, he decides to crash a meeting of S.P.A.T. (Single Parents, Alone Together) in pursuit of more single mothers. This scheme leads to meeting Suzie (Victoria Smurfit) and Marcus (Nicholas Hoult), the socially awkward 12-year-old son of her flaky best friend, Fiona (Toni Collette). A series of odd situations leads to Will and Marcus becoming unlikely friends, and gradually both of their lives start to change for the better. However, when Will falls for the lovely Rachel (Rachel Weisz) and attempts to pass Marcus off as his son, things go awry. In order to win the heart of Rachel and make amends with Marcus, Will must finally grow up--and completely embarrass himself in front of hundreds of people.

Reveling in its characters' quirks and flaws, ABOUT A BOY is a smart, funny, and fast-paced comedy, meticulously crafted by the Weitz brothers. Grant, in possibly the best performance of his career, wisely covers his patented charm with a shallow facade, and Hoult avoids being too cute or precocious; instead, the two actors develop believable characters that grudgingly warm up to each other. Collette is suitably bizarre as a depressed hippie mother, and Weisz provides excellent support in her relatively small role. However, it's clear from the title that this film is about the boys. And that includes Badly Drawn Boy (aka Damon Gough) who contributes an outstanding soundtrack that recalls Simon and Garfunkel's work on THE GRADUATE. Given Nick Hornby's excellent source material, ABOUT A BOY could have easily been an enjoyable movie, but in the hands of its talented collaborators, it's a truly exceptional tale.

Bridget Jones: The Edge of Reason
$6.40
Add to Cart