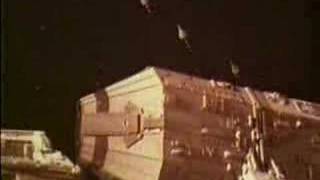 This feature-length pilot episode of the sci-fi series introduces viewers to a band of intergalactic warriors struggling to protect an Earth-bound flotilla against the bloodthirsty Cylons.

Following a vicious and unprovoked sneak attack by the Cylons and the villainous Count Baltar which destroys most of civilization, the last Battlestar, "Galactica", and a small fleet of ships must journey to a new world, Earth, in order to survive.