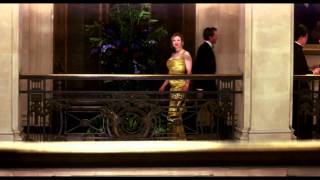 It would be difficult to top the phenomenal success of BRIDGET JONES' DIARY, but the sequel certainly pulls it off. The incomparable Renée Zellweger (JERRY MACGUIRE, COLD MOUNTAIN) once again breathes hilarious life into the flawed heroine who sent her career soaring. This installment of Bridget's journal finds her dealing with the growing pains of a new relationship with Mark Darcy, her crush from the first film (stilted but passionate Colin Firth). Though wildly in love with him, Bridget, a TV producer, worries off and on that Mark and his stuffy attorney crowd may not be quite her cup of tea. When she attends an important law function as Mark's date, she manages to embarrass herself and offend his snobby colleagues. To top it off, Mark's gorgeous and willowy coworker Rebecca (Jacinda Barrett) seems to have a knack for showing up at just the wrong time. When Bridget finally asks Mark outright if he's having an affair with the leggy Rebecca, he refuses to answer. Bridget jets off in a huff, and it appears the relationship is officially on the rocks. To further complicate matters, her cute and caddish former love Daniel Cleaver (Hugh Grant) asks her to join him on-location in Thailand for a TV shoot--another chance at romance for Bridget Jones.

Zellweger makes the film completely her own, and provides some quintessential "Bridget" moments--Bridget trying to walk up a flight of stairs in heels, Bridget careening down a mountain on skis, or Bridget tripping on magic mushrooms on a Thai beach. Brilliantly rehashing this unforgettable character, the sequel is a pleasure to watch that easily matches the original.

About a Boy (Blu-ray)
$13 Super Savings
Add to Cart