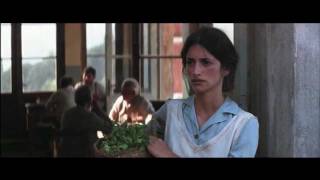 In keeping with Hollywood's time-honored tradition of turning celebrated novels into cinematic spectacles, director John Madden brings Louis de Bernière's acclaimed 1994 work, CORELLI'S MANDOLIN, to life. Set on the Greek island of Cephalonia in 1940, the film tells the story of the beautiful Pelagia (Penelope Cruz), who lives with her father, Dr. Iannis (John Hurt), and is engaged to a local fisherman, Mandras (Christian Bale). When Mandras leaves the island to fight for his country, Pelagia is left behind to worry, and to wait for a letter that never arrives. In the meantime, the Italian army occupies Cephalonia, and Pelagia and Dr. Iannis receive a new visitor into their home. Captain Antonio Corelli (Nicolas Cage), a romantic opera lover with a passion for playing the mandolin, annoys Pelagia with his free-spirited personality, but it's this charm that eventually wins her heart. Soon, the two are head over heels in love. Mandras's return adds friction to the situation, but when the Germans sweep in and begin to senselessly murder the town's locals, Captain Corelli and Mandras must place their differences aside in order to preserve the island. Exquisitely photographed by cinematographer John Toll, Madden's film boasts impassioned performances by Hurt and by the legendary actress Irene Papas.

My Life in Ruins
$6.50 Super Savings
Add to Cart

Customer Rating:
Based on 66584 ratings.


forgot about this movie; remembered it and now can relive the times; the best and worst of the human experience