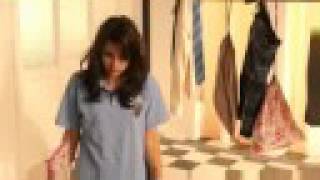 Sight and Sound - 09/01/2008
"Natasha Richardson is fitfully amusing as the gently sarcastic headmistress..."

Nicholas Moore directs this tweeny bopper fish-out-of-water comedy starring Emma Roberts. Poppy (Roberts) is a spoiled Malibu brat, and the film opens with her wreaking havoc on her stepmother's moving-in day. Her father (Aidan Quinn) decides he's had it with her wild ways and promptly packs her off to an English boarding school. Poppy arrives at Abbey Mount with blond extensions, a designer wardrobe, and plenty of attitude, and she is furious when she is forced to follow the school's strict code of conduct. She is determined to find some way back to sunny Malibu. She soon befriends her roommates, a loyal, fun-loving troop of girls, who agree to help her come up with a way to get kicked out of school. They devise a scheme for Poppy to get caught fooling around with the headmistress's (Natasha Richardson) son, Freddie (Alex Pettyfer), but things soon go awry when Poppy's rival Harrier (Georgia King) tries to step in and foil her plan. Poppy is forced to make some big changes, and decide what it is she truly wants.

Emma Roberts is perhaps best known as the niece of Julia, and her wide smile is indeed reminiscent of her superstar aunt's, as is her feisty charm and likeability. This film is loud, silly fun, and it manages to send forth some very positive messages without sucking all the joy out of being a teen. It does touch on sex and underage drinking, so it might not be for the lower tween set. But for the older crew--this one is sure to be a sleepover favorite.

Sixteen-year-old Poppy (Emma Roberts) is a self-obsessed, incorrigible brat who lives a pampered life in her L.A. world. Though she's handed credit cards with unlimited balances and surrounded by countless hangers on, Poppy can't escape the mounting frustration she feels with her family situation. And she makes sure that everyone knows it. After an over-the-top prank pushes her father (Aidan Quinn) one step too far, Poppy is shipped off to an English boarding school. Finding herself in a foreign world of early curfews, stern matrons and mandatory lacrosse, the American princess has finally met her match: a school of British girls who won't tolerate her spoiled ways. Under the watchful eye of the school's headmistress (Natasha Richardson) and surrounded by a new circle of friends, Poppy begrudgingly realizes her bad-girl behavior will only get her so far. But just because she must grow into a fine young lady doesn't mean this Wild Child won't be spending every waking hour shaking up a very proper system...