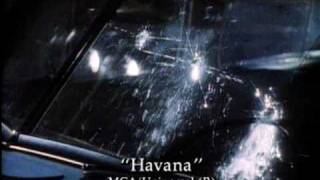 Sydney Pollack directs Robert Redford as Jack Weil, a high-rolling poker player who is trying to make a big score in 1958 Havana, a pleasure seeker's paradise on the verge of revolution. Although excited by the prospect of gambling in a risky environment, his plans are turned upside down when he stumbles into Bobby, the beautiful enigmatic wife of Arturo Duran, an impassioned revolutionary, resulting in a move that threatens his last chance for the big score.

Director Sydney Pollack and Robert Redford join forces to tell the story of high-rolling gambler Jack Weil. Hoping to be pushed to the edge in a place ripe for action, Weil heads to Havana at Christmastime, 1958. Cuba is experiencing prerevolutionary rumblings, and he has a theory that gamblers are more adventuresome when the bullets start flying. Once he arrives, he ends up falling in with revolutionaries and meets a glamorous Swede named Bobby Duran (Lena Olin) and her wealthy husband, revolutionary leader Arturo Duran. Suddenly Jack finds himself making radical gestures, braving financial loss and life-threatening situations in an attempt to save her from dictator Batista's men. Sexual attraction slowly leads the way to political awareness, matching the amount of time it takes for the beginnings of social change. Pollack and Redford's seventh collaboration has a dramatic romantic sweep that's augmented by crisp luminous images that create a sense of heightened reality.

Up Close and Personal
$6.50 Super Savings
Add to Cart