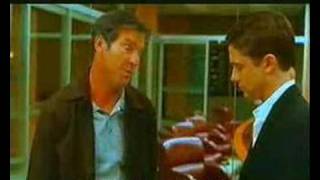 New York Times - 12/29/2004
"[A] nimble, engagingly lightweight drama....It makes for an agreeable solo directing debut."
Los Angeles Times - 12/29/2004
"[G]enial, generous-spirited and unmistakably entertaining..."
USA Today - 12/29/2004
"[T]his workplace satire gets in some licks along the way. And it gives Dennis Quaid one of his best screen showcases."
Entertainment Weekly - 01/21/2005
"[A] bouncy, optimistic comedy....This winning comedy is about the contrast between the enduringly pleasing, quintessentially baby boomer masculinity of Dennis Quaid and the addictively delightful Gen-X charms of Topher Grace..."
Rolling Stone - 01/27/2005
"Fresh comic thinking spices up this smart cookie of a satire from director-writer Paul Weitz. He makes it sexually provocative and subversively hilarious."
Sight and Sound - 03/01/2005
"[A] smart, charming film that moves confidently between comedy and drama..."
Movieline's Hollywood Life - 02/01/2005
"[A] smart, unpredictable comedy with hidden emotional depths."

In his previous effort, ABOUT A BOY, writer-director Paul Weitz managed to smoothly blend elements of dark comedy with heartwarming drama to deftly undercut both of the genre's undesirable excesses. IN GOOD COMPANY is Weitz's solo directorial debut sans his brother Chris, with whom he co-helmed the aforementioned BOY and the wildly successful AMERICAN PIE series. Here, he perfects his gift for the so-called "dramedy," softening the jagged, sometimes ugly edges of corporate satire with warmth and sentiment.

Dennis Quaid is perfectly cast as Dan Foreman, a slightly weary yet still dashing advertising boss and dedicated family man. He seems to have it all as a wholesome and admirable father, an existence which smacks of the archetypical mid-century sitcom dad that he so brilliantly portrayed as the secretly homosexual husband-father in Todd Haynes' FAR FROM HEAVEN. Enter Carter Duryea (THAT 70s SHOW's Topher Grace), a cocky young upstart hired to replace him. Before long, Dan is forced to be deferential to his new baby-faced boss, not only in the office but also at his own dinner table when Dan begins dating his lovely daughter Alex (Scarlett Johanssen). This old-fashioned, slightly soap-operatic twist is the perfect catalyst for the integration of humanity into an environment (and cinematic genre) that is so often devoid of it, and the film simultaneously lightens in spirit and deepens in emotion as a slow-yet-sure, father-and-son bond develops between the former adversaries.