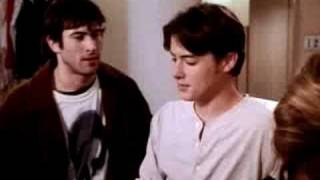 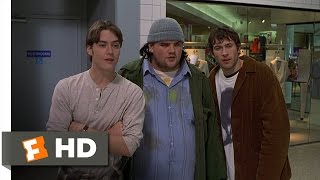 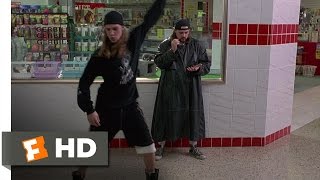 When a couple of well-meaning slackers, T.S. (Jeremy London) and Brodie (Jason Lee), lose their girlfriends, they set about trying to reclaim their pride (and their ladies) in the most obvious of places--the mall. Once there, the pair push the limits of decency and mall etiquette, encountering an array of mall denizens, including Jay and Silent Bob from CLERKS and legendary comic book creator Stan Lee. A surprising number of misadventures ensue, bringing the boys the possibility of regaining their lady loves.

Director Kevin Smith's sophomore effort is bigger and more farcical than CLERKS, but, at its center, remains the story of two guys who know a lot about STAR WARS and comic books and all-too-little about women. T.S. (Jeremy London) has just been dumped by girlfriend Brandi (Claire Forlani), while Brodie has finally played too many games of Sega hockey for Rene (Shannen Doherty). The boys go to the mall to console themselves around establishments such as Burning Flesh tanning salon, Rug Munchers carpet outlet, and Buy Me Toys, but they can't seem to stay out of trouble. Their misadventures finally come to focus around Brandi's involvement in a DATING GAME-like show being taped in the mall. While trying to win back their respective girlfriends, the duo manage to do quite a bit of damage with the aid of Jay (Jason Mewes) and Silent Bob (Kevin Smith), who have even less to do on a Saturday in suburban New Jersey than T.S. and Brodie. Smith's ability to evoke the settings of his youth is as sharp and unerring as ever, while most of the ensemble delights in chewing the scenery--especially Michael Rooker as Brandi's game-show producer father and Ben Affleck as a slacker-hating thug.