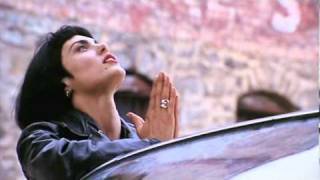 "What's the difference between a killer and the rest of us'" Brian Kessler (DAVID DUCHOVNY) in his voiceover narration
"Boys will be boys!"
- Adele Corners (JULIETTE LEWIS) to Carrie Laughlin (MICHELLE FORBES)

After finishing a magazine assignment on serial killers, journalist Brian Kessler (David Duchovny) is so fascinated that he decides to co-author a book on homicidal maniacs with his exhibitionist-photographer girlfriend Carrie Laughlin (Michelle Forbes). En route to California, where the bored yuppies plan to build a new life in a land more receptive to Carrie's art, they pick up an unusual couple, Early Grayce (Brad Pitt) and Adele Corners (Juliette Lewis). Conveniently, Grayce happens to be a serial killer and serves, along the way, as Brian's in-house specimen. Soon Brian learns that having a real-life murderer in his car is a lot different--and more dangerous--than his long-distance obsession with killers led him to imagine.

The Girl with the Dragon Tattoo (Blu-ray)
$9.80 Super Savings
Add to Cart