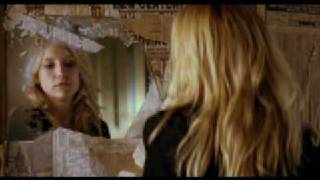 After New Orleans hospice worker Caroline (Kate Hudson) answers a help wanted ad, she finds herself working as the live-in caretaker of Ben Devereaux (John Hurt), a stroke victim who has lost his ability to speak. Ben's wife, Violet (Gena Rowlands), presents Caroline with a skeleton key to open any door in the house--with the exception of one, which she claims she has never been able to open. But curiosity gets the best of her, and Caroline opens the door to find a wealth of materials representing the old house's history of hoodoo, an ancient form of folk magic. She soon discovers that the house harbors a dark secret--one that Violet knows more about than she first admits.

Breaking her string of lighthearted romantic comedies, Kate Hudson gives a performance that proves she's more than capable of playing a feisty damsel in distress. Ehren Kruger's (THE RING) script gives her some physically demanding scenes, while providing the audience with a steady string of effective jolts culminating in a SIXTH SENSE-style twist that few are likely to see coming. Louisiana's swampy, heavy atmosphere is literally a character in the film, while Gena Rowlands, at age 75, astounds once again with one of her most surprising roles.