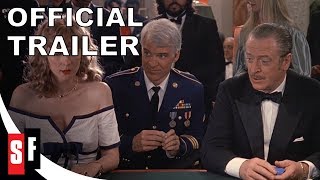 Brash, small-time con man (Steve Martin) meets fake prince in exile (Michael Caine) in this outrageous comedy of backstabbing, elaborate lies, and dirty tricks as the two men battle for the prime fleecing territory of a European resort. A wager between the two over duping an American heiress out of her money sends the stakes higher, as the loser must leave town. However, a wily swindler also searching for good territory might have other plans for the two men.

Master comedy director Frank Oz (BOWFINGER, IN & OUT) sets two con men against each other in a struggle for a French seaside town, the perfect territory for duping gullible and wealthy vacationers. Smooth and complacent swindler Lawrence Jamieson (Michael Caine) is infuriated when clumsy but effective con man Freddy Benson (Steve Martin) encroaches on his hunting grounds. When Benson proves persistent, Jamieson makes him a bet over who will be the first to get $50,000 out of a visiting American heiress, with the loser leaving town.
Trademark physical comedy from Martin and Caine's smarmy and perfectly timed lines fuel the hilarious competition and decisive showdown--which ends as neither man expects.