Revenge of the Virgins

A tribe of topless Indian virgins take revenge on the white settlers who would steal their gold in this exploitation classic written by Ed Wood. 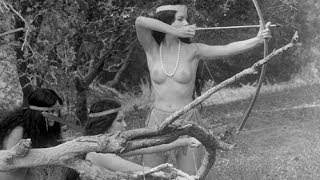 Revenge of the Virgins (Trailer)

"This is the revenge of the virgins...beware the savage guardians of the Golden Horde..." The ranks of a Native American tribe have been decimated by white settlers seeking their gold. Only the young women remain. After a prospector learns of their legend, he assembles a team of gunslingers to take the gold by force. But the fierce Indian maidens are not so easily defeated. The young virgins will have their revenge on the white man at last...

Revenge of the Virgins is the first movie directed by Peter Perry, Jr., who made many adult films in the 1960s. These included, most famously, 1964's Kiss Me Quick! (using the colorful screen name of Seymour Tuchus.) Revenge of the Virgins is most notorious for the "Indian" girls' costumes. Or rather, their lack thereof: the actresses (mostly culled from burlesque shows and pin-up mags) spend the entire film topless in bottom-baring loin cloths. Jodean Russo, the only actress who gets to keep her clothes on, would go on to a long career (as Jodean Lawrence) in respectable pictures such as Airport (1970), Johnny Got His Gun (1971) and Funny Lady (1975). Modern sources credit the screenplay to Edward D. Wood, Jr. (Plan 9 from Outer Space, Glen or Glenda), using the alias Pete La Roche. Actress Nona Carver later appeared as 'Sleazy Maisie Rumpledinck' in Wood's pornographic Take It Out in Trade (1970). Narrator Kenne Duncan is best known for countless 'B' Westerns, but also worked with Ed Wood in Night of the Ghouls (1959) and The Sinister Urge (1960).

BONUS: The Golden West (1944): Learn about a real gold mine located on a Navajo reservation in this short subject produced by Leslie Winik, founder of Official Films.

My Man Godfrey
$19
Add to Cart

Behave Yourself
$10
Add to Cart