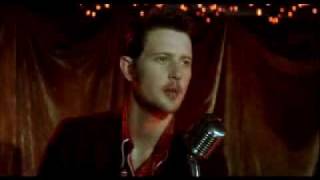 In 1984, writer Sam Shepard and director Wim Wenders teamed up for the indie hit PARIS, TEXAS, a story about family and identity, set in the American West, that won the Golden Palm at the Cannes Film Festival. More than twenty years later, they're back together again for DON'T COME KNOCKING, a highly entertaining journey that examines the similar topics, with equally inspiring results. Shepard stars as Howard Spence, a former Hollywood cowboy legend whose career has fallen apart in a blur of women, drugs, and alcohol. He disappears from the set of his latest film in Moab, Utah (directed by the great George Kennedy), bent on figuring out just who he really is, so he heads home to Elko, Nevada, to see his lonely mother (Eva Marie Saint) for the first time in thirty years. Unbeknownst to him, he is being trailed by Sutter (Tim Roth), a bondsman determined to find him and bring him back to finish the $32 million movie he started. The grizzled Spence finds out that he might have a child from a fling on an old film set, so he takes off for Butte, Montana, where his past quickly catches up to him in the form of a small-town waitress (Shepard's real-life wife, Jessica Lange). As he tries to establish some kind of relationship with his son (Gabriel Mann), a musician with a bizarre girlfriend (Fairuza Balk), he is also followed by a quiet young woman (Sarah Polley) walking around with an urn. DON'T COME KNOCKING, which was nominated for the Golden Palm at Cannes, is another insightful, offbeat look into the American psyche by German director Wenders (WINGS OF DESIRE, UNTIL THE END OF THE WORLD), gorgeously shot by cinematographer Franz Lustig, with an excellent country soundtrack produced by T Bone Burnett. Shepard is terrific as Spence, not afraid to grit his crooked teeth and bare his beat-up soul.

72%off
Lightning Over Water
$6.97 Winter Sale
Add to Cart