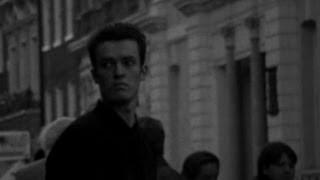 Bill (Jeremy Theobald) is in trouble. He's a writer who, when bored with pounding the keys on his Remington, goes into the streets to follow people. He becomes so obsessed with following them that he has set up rules--like not following them when he discovers where they live or work. Then, one day, he breaks those rules. And, as he explains to the policeman he is telling all this to, "that was when the trouble started." Bill gets closer and closer to those he is following. He follows one man into a restaurant, and is startled when the man, Cobb (Alex Haw), confronts him. Cobb, too, is interested in people--but he doesn't follow them, his interested is peaked by robbing them. Bill joins Cobb in breaking into an apartment. So begins FOLLOWING, Christopher Nolan's fiendishly clever first film. Nolan was director, screenwriter, co-producer, director of photography, and co-editor, and only able to shoot on Saturdays--the filming took a year. Set in the grimy streets of London, the tightly wound thriller unfolds in a series of overlapping plots, each more intricate than the last, each pulling Bill deeper and deeper into ever worse trouble. FOLLOWING may be short in length and cheaply made; it is also devastating.