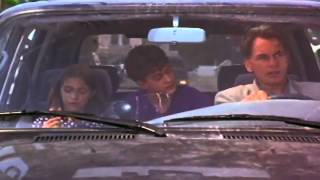 Magic In The Water Trailer 1995

"Quit your whining! Get a life!"
- Dr. Jack Black (MARK HARMON) to a caller on his radio program

A troubled family gets a second chance when a mythical lake monster with a weakness for Oreo cookies befriends their lonely young daughter. Winner of the Award of Merit from the Academy of Family Films and Family Television.

When his ex-wife complains that he doesn't spend enough time with his family, radio psychiatrist Dr. Jack Black decides to take his children on holiday. They go to Glenorky, a Canadian resort with a special feature -- according to local legend, a creature named Orky lives in its lake. Jack's unhappy daughter Ashley becomes friendly with the monster who offers her some respite from her troubles. Then Jack gets a bump on the head, and he's instantly transformed into a kinder, sweeter dad. Could he be possessed by the spirit of Orky'

The Water Horse: Legend of the Deep (Blu-ray)
$13.10 Super Savings
Add to Cart

It's All About Love (DVD)
$13 Super Savings
Add to Cart