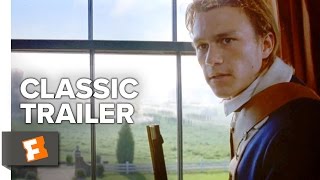 Mel Gibson stars in this action-packed historical drama from the director of INDEPENDENCE DAY and GODZILLA. Gibson portrays Benjamin Martin, an unassuming South Carolina widower who is forced to join the American Revolution when the British threaten to take his farm away from him. Together with his patriotic son, Gabriel (Heath Ledger), the pair faces the vicious Redcoats with a heroism that reflects the stubborn pride of a young country's most dedicated supporters. THE PATRIOT is a sweeping epic adventure that sheds light on America's past, and at the same time entertains audiences.

In this Revolutionary War epic from director Roland Emmerich (INDEPENDENCE DAY, GODZILLA) and writer Robert Rodat (SAVING PRIVATE RYAN), history unfolds as one man struggles to bury his demons and keep his family whole. Mel Gibson plays reluctant hero Benjamin Martin, a man who fought with both heroism and brutality in the French and Indian War, but who is now seeking to peacefully tend his own fields and ignore the later and greater conflict. Despite Martin's scrupulous parenting, however, his idealistic son Gabriel (Heath Ledger) leaves home to join the colonial army. Soon the war is literally on Martin's doorstep; a cruel British officer named Tavington (Jason Isaacs) kills one of his children and unwittingly galvanizes Martin, Gabriel, and a ragtag militia of locals into a fierce guerilla unit bent on revenge and liberty.
THE PATRIOT is concerned with honor among soldiers, finding and losing love in the midst of chaos, and also with a tactical shift from open-field combat to the hide-and-fight strategies that would come into their own in modern warfare. The historical details are imaginative, to say the least, but the spectacle is what's really effective in bringing the fight for independence to life.

We Were Soldiers
$6.80 Super Savings
Add to Cart

The Last of the Mohicans
$8.70 Super Savings
Add to Cart