Rolling Stone: 3 stars out of 5 -- "BATTLE STUDIES is a real study in craftsmanship and understated guitar ninja-dom, and musos will thrill to Mayer's deconstruction of Robert Johnson's 'Crossroads.'" 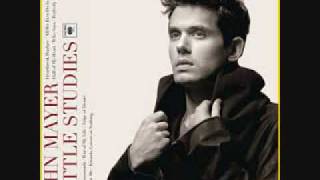 Rolling Stone - p.116
3 stars out of 5 -- "BATTLE STUDIES is a real study in craftsmanship and understated guitar ninja-dom, and musos will thrill to Mayer's deconstruction of Robert Johnson's 'Crossroads.'"
Entertainment Weekly - p.84
"[A]n expertly calibrated study in soft-pedal confessionals, searching lyricism, and mildly groovy guitar licks."
Billboard (p.32) - "[H]e marches into fresh stylistic terrain by sampling an anthemic U2 ambience on 'Heartbreak Warfare'..."
Q (Magazine) - p.120
3 stars out of 5 -- "'Heartbreak Warfare' and 'War Of My Life' chug pleasantly along in their Police-lite way..."

It's no secret that John Mayer is a 21st Century Fox, wining and dining women all through tabloid headlines, so it's about time he delivered an album that traded upon his loverman persona -- and Battle Studies is that record in spades. Retaining more than a modicum of the slick, soul-blues undertones of Continuum, Mayer fashions a modern groove album, a record that maintains a smooth seductive vibe so thoroughly it spills into a one-man band cover of "Crossroads." Mayer remains somewhat of a disciple of Slowhand, but he shows an unusual interest in the big AOR stylings of Journeyman, along with Stevie Ray Vaughan's In Step, creating a coolly clean blend of synths and Strats, one that's as much about texture as it is about song.something perfectly appropriate for a make-out album like this. Sometimes, Mayer dips too heavily toward the texture, but he can't resist a good, tight melody and builds the bulk of Battle Studies upon them: the elegant "Half of My Heart," the softly soulful "Perfectly Lonely." Here, Mayer is effortlessly seductive and somewhat irresistible, and it's easy to see why the ladies love cool John. ~ Stephen Thomas Erlewine