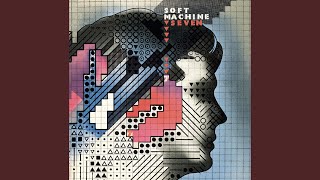 Soft Machine: Karl Jenkins (oboe, baritone & soprano saxophones, recorder, electric piano); Mike Ratledge (organ, synthesizer, electric piano); Roy Babbington (acoustic & electric basses); John Marshall (drums, percussion).
Soft Machine's revolving door of personnel changes continued with 1974's Seven, the last Softs album with a numbered title and also the last released by Columbia. Bassist Hugh Hopper was gone, replaced by Roy Babbington, a guest musician on 1971's Fourth who had played bass with Nucleus. Two other Nucleus alumni, keyboardist/reedman Karl Jenkins and drummer John Marshall, were on board as well, and since keyboardist/composer Mike Ratledge was now the band's only founding member (actually, Hopper wasn't an original member either, having replaced Kevin Ayers for Volume Two), the group's links to its early years seemed increasingly tenuous -- and would become more so. Yet when Jenkins had joined the group prior to Six, following the departure of saxophonist Elton Dean, he seemed to bring an intuitive grasp of how Soft Machine could continue moving forward in the band's jazz-rock years while retaining touchstones to the past. A less assertive saxophonist than Dean, Jenkins played multiple reeds but didn't really match Dean as an improviser; his main contributions in the future would be as keyboardist and composer in the ever-evolving Soft Machine style of jazz-rock. And on Seven, he penned seven of the album's 12 tracks, beginning to assume the band leadership role that Ratledge -- who composed four tracks -- shied away from. With Jenkins edging closer to the band's creative center, the Softs forged ahead with their riff- and ostinato-based music, keyboard and reed melodies intersecting at unexpected angles with streamlined yet often odd-metered bass and drums, all flowing forward with muted, spacy sonorities and sometimes hypnotic repetition (and, of course, bridges or codas of echoing keyboard loops).
Ratledge composed a trio of connected tracks for Seven, a mini-suite beginning with the modal 9/8 "Day's Eye," including a solo feature for him to cut loose with his patented fuzz organ tone, bridging through the brief burst of "Bone Fire" (which puts Jenkins through his paces on baritone sax) to the truly heavy "Tarabos," its bass/keyboard vamp pulling upward and resolving at skewed points along an 18-beat sequence while Jenkins solos wildly with a signal splitter on his horn. But Jenkins sets the album's pace, beginning with the upbeat fuzzy riffing of the opening "Nettle Bed" and the drifting, dreamy "Carol Ann" through his own suite of connected tracks during the second half, including the trance-inducing "Penny Hitch," the full-throttle "Block" (building to an abrupt staccato unison conclusion), and the comparatively relaxed 5/4 vamp of "Down the Road" (featuring a fine arco acoustic bass solo from Babbington). The album ends with three minutes of spacy looping keyboards, split in two with the first part, "The German Lesson," credited to Ratledge as composer and the second part, "The French Lesson," credited to Jenkins, but there is no discernable division or musical difference between them -- no doubt intended as a joke, but also an apt comment on the passing of the torch during Soft Machine's '70s jazz-rock years. ~ Dave Lynch