Also released as:
Zathura (Anniversary Edition) (Blu-ray) for $19
92% recommend us! 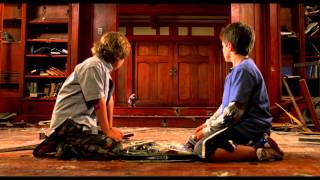 Actor-turned-director Jon Favreau (SWINGERS, ELF) delivers another work of intelligent, charming family fare with this space adventure, based on the book by Chris Van Allsburg (JUMANJI). Older brother Walter (Josh Hutcherson) and the younger Danny (Jonah Bobo) are constantly at war with one another, bickering over the mediating voice of their long-suffering father (Tim Robbins). When he has to go to the office to replace some papers the boys destroyed in their crossfire, he leaves them in the dubious care of older sister Lisa (Kristen Stewart), who is sleeping upstairs. When Danny discovers an old board game called Zathura stored in the basement, his excitement is lost on Walter, who has no time for such old, boring toys. Soon, however, the game becomes impossible to ignore, as the boys are transported into space, and one of them must win in order to make it home again. Each turn brings a new, often dangerous, surprise, and the boys are faced with a murderous robot, an explosive meteor shower, and lizard-like aliens, while poor Lisa is cryogenically frozen early in the game. The adventure yields some heartwarming, family-friendly life lessons, and Dax Shepard (IDIOCRACY) is unusually subdued in his role as a stranded astronaut.

Children | Theatrical Release | Brothers | Outer Space | Based On A Novel

The Neverending Story
$6.40
Add to Cart

The Spiderwick Chronicles
$6.40
Add to Cart

The Spiderwick Chronicles
$9.10
Add to Cart