The story of a man ready to make a connection. 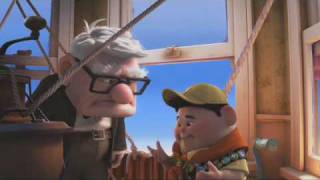 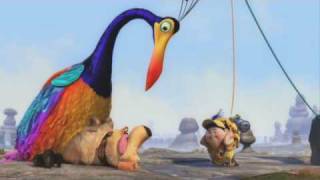 Hollywood Reporter - 05/13/2009
"Winsome, touching and arguably the funniest Pixar effort ever, the gorgeously rendered, high-flying adventure is a tidy 90-minute distillation of all the signature touches that came before it."
Box Office - 05/13/2009
5 stars out of 5 -- "Breakneck speedy, hysterically funny and appropriately lithe, UP handles itself in action with the same intensity as with comedy..."
USA Today - 05/29/2009
4 stars out of 4 -- "Adventure comes in many forms and can happen at any stage of life. Disney/Pixar's UP conveys that message through an artful blend of exhilaration and poignancy."
Los Angeles Times - 05/29/2009
"UP is the purest pleasure....Rarely has any film, let alone an animated one powered by the logic of dream and fantasy, been able to move so successfully -- and so effortlessly -- through so many different kinds of cinematic territory."
New York Times - 05/29/2009
"In its opening stretch the new Pixar movie UP flies high, borne aloft by a sense of creative flight and a flawlessly realized love story."
Washington Post - 05/29/2009
"[A] soaring, touching, funny and altogether buoyant movie that lives up to its title in spirit and form."
A.V. Club - 05/28/2009
"UP is challenging, emotionally and narratively, but it trusts viewers to keep up; Pixar has never been interested in talking down to children or their parents..." -- Grade: B+
Chicago Sun-Times - 05/27/2009
4 stars out of 4 -- "UP is a wonderful film....This is another masterwork from Pixar, which is leading the charge in modern animation."
Entertainment Weekly - 12/25/2009
Included in Entertainment Weekly's "The Best Films Of The Year" -- "[A] marvelous, moving, funny, and all-in-all beautiful modern animated classic..."
Chicago Sun-Times - 12/24/2009
Included in Chicago Sun-Times's "The Ten Best Animated Films Of 2009" -- "[The film] has a meaningful undertone, and opens with extraordinary sequence..."
Rolling Stone - 12/24/2009
Ranked #5 in Rolling Stone's "The 10 Best Movies Of 2009" -- "Pixar's animation magic is invariably irresistible..."
USA Today - 12/31/2009
Ranked #2 in USA Today's "Top Ten Films Of 2009."
Uncut - 10/05/2009
4 stars out of 5 -- "[A] surreal, sweet-natured comedy about a cranky old man, a flying house and some talking dogs."
Total Film - 01/15/2009
4 stars out of 5 -- "[T]he light-as-air, gentle sway of emotion in UP lifts Pixar to glorious heights."

A feisty septuagenarian teams with a fearless wilderness ranger to do battle with a vicious band of beasts and villains in this computer-animated adventure scripted by Pixar veteran Bob Peterson and co-directed by Peterson and MONSTERS, INC. director Peter Docter. Carl Fredricksen (voice of Ed Asner) is a 78-year-old balloon salesman. His entire life, Carl has longed to wander the wilds of South America. Then, one day, the irascible senior citizen shocks his neighbors by tying thousands of balloons to his home and finally taking flight. But Carl isn't alone on his once-in-a-lifetime journey, because stowed away on his front porch is an excitable eight-year-old wilderness explorer named Russell. Later, as the house touches down on the world's second largest continent, Carl and his unlikely traveling companion step outside to discover that not only is their new front lawn considerably larger, but that the predators therein are much more ferocious than anything they ever faced back home.